And more news on a starting citrus season in Spain

Good recovery of the growing capacity, the not cleared uncertainty regarding the USA and the UK markets and a "COVID effect" which increases the domestic consumption are some of the main topics concerning this 2020/2021 citrus fruit season in Spain.

In mid-September, the Ministry of Agriculture presented a first estimate of the citrus fruit harvest for the 2020/2021 season, forecasting 6.93 million tons in Spain. This figure is 12% higher than that of the previous season, which was very short, and 5% above average. Compared to the average of the last few years, they expect a decrease of 1% for oranges and 3% for grapefruit, while small citrus fruits will increase by 12% and lemons by 8%.

The increase in volume will be crucial to cover the boom in citrus consumption that is taking place since the outbreak of the pandemic. An increase in production is "key to avoiding tensions in the market", the representative of a Valencian farmers' organization declared. 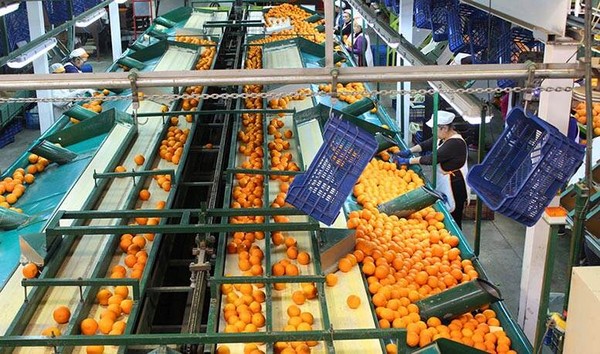 The citrus fruit trade showed great dynamism, especially from the beginning of the pandemic, as these fruits are easy to preserve and durable, as well as having healthy qualities.

Thus, with data up to May, domestic consumption registered an accumulated increase for all citrus fruits of 5.1% in volume; this figure rose by 17% in value. The increase in lemon consumption was very significant, growing by 11.2% in accumulated annual consumption.

In the first part of the last season (from September 2019 to March 2020), Spanish exports remained at levels below those of the previous season (-3.4%) and the average of recent years (-3.7%); on the other hand, the value increased by 19% with respect to the last season due to the increase in unit prices.

Exports to third countries dropped significantly in view of the growing demand experienced by the main partner (EU).

According to sector sources, despite the drop in production, the notable growth in national consumption and the logistical difficulties imposed by the pandemic, Spain was able to supply important quantities of citrus fruits to the EU. One fact: last March, Spain sent almost half a million tons to the European market, a record figure for that month.

In this market context, prices received by growers were much higher than in previous seasons. In the case of oranges, for example, the price was 40% higher than the average of the five previous campaigns.

First news on the ongoing season
Apart from the expected production figures mentioned above, there are other issues related to this sector, some are new but some others not:

Prices at farm gate are now higher to those registered at the beginning of the previous season. In Castellón, clemenules are being paid at 0.31-0.36 euros per kilo. "The rains recorded last spring have led to a good fruit size", a grower from Valencia said.

Competition from third countries. "Spanish citrus fruits must show their greatest respect for the environment," a Valencian grower says. Competition from third countries is becoming increasingly evident. "There will always be consumers who prefer a variety regardless of origin. However, Spanish growers should make European consumers aware of our lower carbon footprint compared to fruit from the southern hemisphere".

Key markets for Spanish citrus exports, such as the USA and the UK, continue to be an unknown factor and can torpedo one of the major objectives of the citrus sector: diversification of destination countries at a time when competition from third countries is growing season after season.

The control of the so-called pest Cotonet (Delottococcus aberiae), present especially in the Valencia Region; farms with increasingly older trees and the abandonment of farms that the sector continues to suffer from will be other key issues in the coming weeks to further refining the production forecasts.

Main production regions
In the Region of Valencia, a harvest of almost 3.5 tonnes of citrus fruits is expected, 13.5% more than in 2019/2020.?The forecast for Andalucía, a region that grows 33.5% of the total Spanish citrus fruit, is 2.3 million tons.?Murcia will continue to be the national leader and will produce 63% of the Spanish total for lemons this season. In the previous season, it produced around 560,000 tons.