Preparing for TR4: How the disease has spread and important steps to take

One of the topics addressed at the International Banana Convention this week was one that is very important and detrimental to the industry: TR4. Altus Viljoen, who is a professor of AgroSciences in the department of plant pathologies at the University of Stellenbosch in South Africa, discussed the spread of the disease and what methods should be undertaken to minimize the damage. 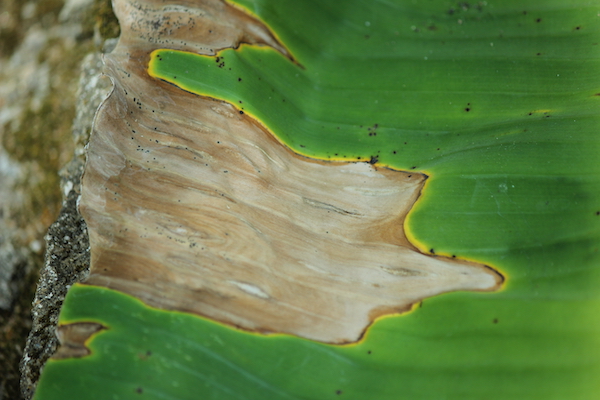 The spread of TR4
The fungal strain TR4 which causes Fusarium wilt in Cavendish banana trees was first identified in 1990 in Taiwan, explains Viljoen. There’s been great variation in the effects of TR4 depending on the response to the disease and the nature of the cultivation. “China’s experience with TR4 is a good example of the dangers of not reporting the disease,” Viljoen says. “While the first detection of TR4 was reported in 1998, it was actually four years prior to this that researchers had started seeing plants with very similar symptoms to Fusarium wilt in the plants, and no action was taken. So, the disease was able to spread very rapidly and mostly uncontained. In 1998, the disease was found on 14 acres and by 2010 it had spread to 40,000 acres. When this happens, the only thing a grower can do is to either replant with a more resistant banana plant or to replace the bananas with a different crop, which are often not options for smaller growers.”

In China, the nature of the banana industry also contributed to the rapid spread of the disease. “There is a large number of small growers in China who cultivate around 2-3 hectares and the overall growing format there is a large-scale monoculture production of Cavendish bananas, which means that there was a likely a lot of cross contamination. In contrast, while TR4 was discovered in Northern Mozambique in 2013 on one farm, and on another farm in the same region the following year, due to the scarcity of banana farms in that region, the disease has not yet spread further than that,” Viljoen says. 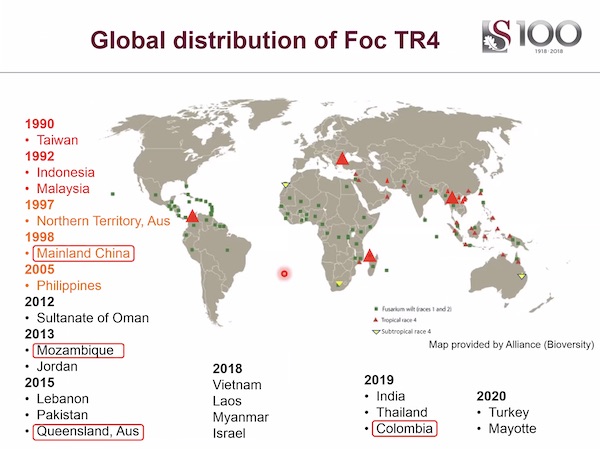 Australia is another example Viljoen discussed that has an interesting history of their encounters with TR4. Viljoen says: “When it was first found in 1997, it was in Darwin, where the production of bananas is quite small scale compared with Queensland where 95% of the country’s bananas are produced. When TR4 was found in Darwin, regulations were put in place that restricted the movement of plant material and machinery out of Darwin, but there were not many biosecurity measures put into place in Queensland. Likely due to this, in 2015, TR4 was discovered in Queensland. But the way that this was dealt with was actually very effective: up until today, only five farms in the area have been infected, and this was due to three main factors that were put into place after the detection in 2015: good regulation, industry commitment and research. Those three pillars helped them deal with the disease and the success is largely due to the growers, government, industry, scientists and researchers all working together.”

Research
As the effects of TR4 are devastating to banana growers, a lot of research is being done to find solutions. “There is some limited Cavendish material available that shows levels of resistance to TR4,” Viljoen says. “One of the disadvantages of these variants is that they perform differently in countries other than where they were developed so it is very important to test these varieties in new locations. I hope that in the next 1-2 years, more options will become available, and a lot of work is currently being done on this.”

Ground covers are also recommended by Viljoen as a way to minimize the spread of the disease. “Ground covers prevent the movement of the soil when people walk on it. It is important to remember that it can take up to a year after the initial infection for the plants to show any symptoms of the disease, so limiting cross contamination within farms in addition to between farms will help limit the effects,” he says. 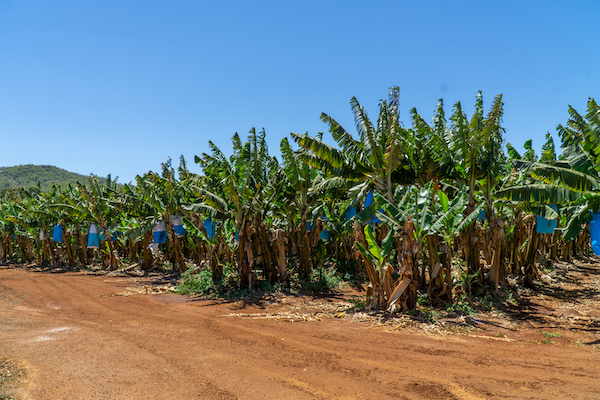 Measures to prevent the spread of TR4
As Viljoen said, the three pillars for dealing with the disease are good regulation, industry commitment and research. For preventing the introduction of the disease, the steps are similar, Viljoen shares. “Regulation, awareness, biosecurity, early detection and research are vital. Regulations should ensure that there is a national contingency plan, regulations regarding the importation of bananas and plantains, as well as disinfection at airports and harbors. Additionally, bringing awareness to the growers is of vital importance. Ecuador has done a tremendous job of making the region aware of the threat of TR4. There have been a lot of trainings on the topics, as well as exercises that simulate a possible outbreak and how to respond to it.”

With regard to biosecurity, the most important aspect is to work to prevent cross contamination. “Irrigation sources are very important as healthy plants can be affected through a contaminated irrigation system. If growers share an irrigation system with others, extra steps need to be taken to ensure it is clean. Similarly, cleaning vehicles as well as visitors when they enter the farm is vital. It needs to be noted that disinfectants don’t work if there is mud or dirt on the vehicles, and they need to be cleaned off with water first before applying disinfectants. Finally, sharing machinery, equipment and field tools can also transmit TR4 so it is important that these are cleaned before they are used,” he says.

The most important factor to limiting the damage of TR4 is early detection, says Viljoen. “The quicker it can be reported, and investigations and protective measures can be launched, the higher the chance that it can be contained,” he concludes.