With the season coming to an end in Mexico, Brazil and Spain are currently the main mango suppliers. Exports from Egypt, which mainly serves the Eurasian market, and Ecuador, which supplies the North American west coast, will soon follow. The volumes from Spain and other Mediterranean countries, such as Israel, are lower than expected, resulting in high market prices. Many countries are therefore finishing their seasons earlier than usual. In China, the production is growing in the southern province of Hainan, although here the fruit has to compete against imports from Southeast Asia. 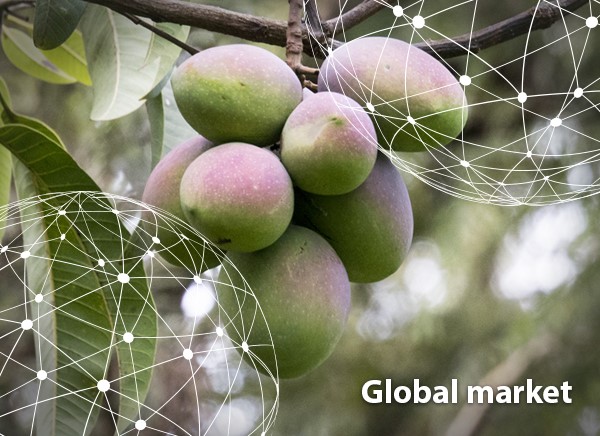 Netherlands: Mango prices are moving in the right direction
The situation on the mango market is heading in the right direction, according to a Dutch mango importer. "In Spain, the Osteen mango season is finishing earlier due to several reasons, including sunburn. As a result, we are seeing a higher demand for Brazilian mangoes from German supermarkets. At the beginning of the season, rainfall caused some problems during the flowering period, which limited the shelf life, but now the quality from Brazil is considerably better. Besides the Palmer, the Keitt is the most marketed variety right now, and the first Kent mangos are also starting to arrive. All in all, there is a fairly stable market with constantly increasing prices. The times when mangoes were sold for 3 Euro have fortunately been left behind. The only problem is that due to the coronavirus crisis there is not enough packaging material available, which means that Brazil is currently unable to export the volumes that the country has available."

Germany: Spanish mangoes are gaining ground
In the German wholesale market, Brazilian Kent mangoes are currently the most traded. These cost around 35 Euro / package. There are also some Brazilian Red Moon and Keitt mangoes. The coronavirus crisis continues to take a toll on the market, especially when it comes to flown in goods. This is playing into the hands of Spanish Osteen mangoes, which have been available for a few weeks now. "The Osteen is an interesting alternative; unfortunately, these mangoes contain a lot of fibers and threads," reports a trader from Hamburg. “The quality of the Spanish Kent mangoes, on the other hand, is much better. We have been offering these since last week and in terms of price they also stand at around 35 Euro / package.”

France: High prices due to shortages
The Israeli Kent mango season has finished very early this year due to a shortage of volumes. The supply is therefore low and prices are rising. Even with mangoes of lesser quality, the demand remains strong. The demand for mangoes will remain low until the start of the Brazilian season, which starts in early November.

Italy: Sicilian season until December, mainly Spanish product on the market
The Sicilian production will end in December with the Keitt variety. There continues to be demand from wholesalers and consumers. The Covid-19 pandemic has consolidated B2C trade exponentially and increased B2B trade, both domestically and abroad. "Fresh product sales in Italian supermarkets have registered an average of 8 euro/kg," says a producer who has already finished the campaign.

The Sicilian production suffers from the competition of the Spanish product, which arrives in Italy at 50% lower wholesale prices. In Sicily, the most successful varieties are the Glenn, Maya, Irwin, Kent and Keitt. These compete with the Osteen and Irwin mangoes from abroad, which will soon be complemented by the Kent, Keitt and Tommy Aktins varieties. "We have chosen to work mainly with large distribution chains - says the producer - Horeca and online sales are also growing."

A wholesaler in northern Italy offers Spanish mangoes transported by road, as an alternative to the products shipped by air from South America. The prices of Spanish mangoes range between 2 and 4.5 euro/kg. The product is of high quality because it is harvested at an advanced stage of maturation. The prices, however, are much lower compared to those of the Brazilian mangoes shipped by air.

Spain: Prices are higher than expected
This season, an "On year" had been expected for Spanish mangoes. Nevertheless, the heat waves and strong winds have reduced the volumes to about half of what the sector expected.

Due to the low mango production in Spain, prices at origin are high and continue to rise, but they are higher than what the European markets are willing to pay. "It is difficult to defend these prices and the demand is not very high, as retailers expected more affordable prices this campaign," said an exporter. The season will be shorter than usual due to the low production.

In the exporter's opinion, the mango season is better when there are larger volumes, because although the price is lower, the growers end up selling more and making more money. “We manage to sell more at more competitive prices. There are many players in the mango market, so if Spain has a lower yield, it will not have a significant impact. If the prices of Spanish mangoes are only slightly higher than those of other producing countries, then many European buyers prefer the Spanish product because of the quality, proximity, diversity in sizes and speed of purchase operations, etc. But if we sell them at almost double the price, it's a different story.” However, the fruit's quality and sizes are quite satisfactory. Another grower and exporter points out that many supermarket chains from countries such as Switzerland, France or Germany remain loyal to Spanish mangoes despite the prices.

The Osteen harvest will end in 2 weeks and will be followed by the Kent, as well as the Keitt and Palmer; two late varieties that have become increasingly interesting for growers because of the better profits. The sector is now more focused on late varieties, as the Osteen, which accounts for more than 50% of the total production, is harvested in the first weeks of the season, and the large volumes push prices down. The consumption of mangoes continues to grow in Spain. Mango prices remain affordable for the consumer and that also plays an important role.

Israel: Disappointing volumes
In addition to this being an off-year in Israel, the heat waves in the country have taken a severe toll on mango cultivation. The production of Keitt, Kent, Omer, Maya and Shelly mangoes has therefore been lower than initially expected. The season is now over. The acreage devoted to mangoes in the country remains stable.

Egypt: Further increase in exports and cultivation
More than 30 varieties of the "king of summer fruits" are grown in Egypt, with the most sought after being the Zebdya, Mabrouka, Sideeka, Awees, Keitt, Kent, Tommy and Naomi. These varieties are the bestsellers. Egypt has increased its mango production in recent years. According to an Egyptian exporter, mangoes are currently the most important export fruit after citrus. Egypt is planning to harvest some two million tons of mangoes, with a steady increase in exports in 2020. The Egyptian Ministry of Agriculture says that the acreage devoted to mangoes has exceeded 90,000 hectares because of the crop's financial viability. Egypt's mango exports amount to about 53,000 tons per year. Egyptian mangoes are shipped to more than 50 countries. The main export markets are Europe, the Middle East, Asia, Russia and Central Asia (The CIS). Egyptian mangoes are in high demand from September to December, as people eat fruit more frequently and in larger portions.

South Africa: Very good prospects for new harvest
It is still early for the South African mangoes, but growers paint an optimistic picture for the new harvest, especially after the recent rains in the country, which are "excellent" for the further development of the fruit on the trees. This year's winter has been cold and the mango orchards are in full bloom. According to a grower from Limpopo, this is the best blossom season he has ever seen. In some low-lying areas, the cold has caused some damage, resulting in lower fruit setting.

Although no official estimate has yet been made, the first indications point to the harvest next season likely being 30% greater than the previous one. The harvest starts at the end of November. There has been a small increase in exports in recent years.

China: Domestic production under pressure due to imports from Southeast Asia
Hainan is one of the most important mango production regions in China. Besides the impact of the coronavirus, Hainan's production has continued to increase over the past two years, which has resulted in the fruit's oversupply on the market and severe price drops, with the consequences that this entails for the growers.

Vietnamese mangoes, which are loved by consumers, have been imported into China for many years and the export season overlaps with the end of the domestic mango campaign.

This year, Cambodia is working to export mangoes to China. Southeast Asian mangoes, which are increasingly shipped to China, have a greater impact on domestic mangoes. They have a strong competitive advantage due to their high output and low prices.

United States: Scarcity in the market pushing prices up
There is scarcity in the US market. Most mangoes currently come from Brazil, but that country had problems with the logistics two weeks ago, which prevented a ship from sailing. As a result, no new stock of mangoes arrived. The scarcity will be worsened by the completion of the Mexican season. Also, the Brazilian mangoes are more expensive on the west coast because of the distance (the ships moor on the east coast).

In the first or second week of October, however, Ecuador will be back on the market, together with Brazil. On the west coast, Ecuadorian mangoes will push the Brazilian out due to costs. The country has started early with the red mangoes and soon the Tommy Atkins will also arrive. The sizes are generally smaller, with many 10's and 12's. Traders expect that the demand for the fruit will be good between October and December, as many summer fruits have now disappeared from the shelves. Prices are higher than last year.

Australia: Further promotion of the fruit in the domestic market
The peak of the Darwin mango season is approaching. The Australian Mango Industry Association (AMIA) reports that 384,000 7kg trays were shipped to the market in week 40. Also, 3,000 trays arrived from the Katherine region and another 1,000 trays from the Kununurra region, both of which are in the early stages of their harvest seasons. Growers, however, are concerned about the weather, given the forecasts for high temperatures and storms in some parts of Northern Australia.

The domestic mango season, which is starting next fall, will peak in December / January, when Queensland's growing regions enter the market. In an uncertain year marked by coronavirus restrictions, the AMIA hopes to position the tropical fruit as an "essential item'' this summer through increased marketing and promotion activities and investment in key export markets. The focus will be on delivering a consistently "excellent quality" to ensure repeat business. The AMIA reported that 10.6 million trays were shipped to the market in 2019.