Yesterday’s protests at the bail hearings for the suspects in the murder of a young Free State farm foreman took a violent turn when some in the crowd attacked a police vehicle and stormed the police station to get to the two suspects in the holding cells.?

The killing of the farm manager last Friday on the one-year anniversary of his appointment on the farm, reportedly after he chanced upon livestock thieves, has led to a groundswell of anger at the level of violent crime in South Africa. 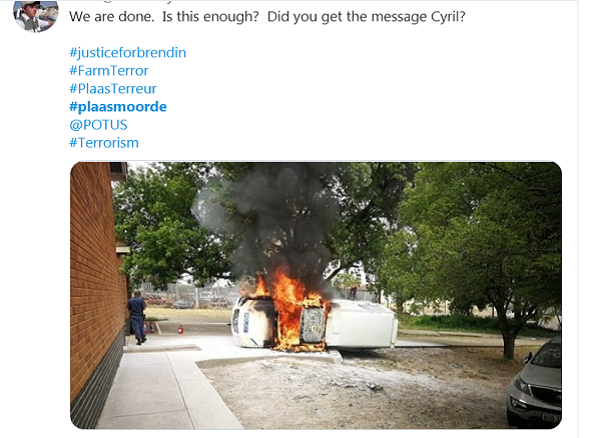 Organised agriculture reports progress in talks with police
On Monday rural criminality was again the focus of "robust discussions" between top South African Police Service officials and three of the main agriculture organisations, with a renewed public affirmation to combat rural crime.

The establishment of Joint Rural Safety Command Centres and community-based reservist forces will mark a strengthening of the rural fight against crime, noted their joint statement.

The Democratic Alliance, South Africa’s main opposition party, has said that it is four times more dangerous to live on a farm than anywhere else in South Africa.

Parliament discussed farm attacks last month
Farm attacks were discussed by parliament last month. Rural safety analysts at some agricultural organisations had noted a new momentum from government level to combat the problem, but the level of distrust runs deep towards government as well as towards populist political parties who still occasionally employ the apartheid-era chant of "kill the farmer, kill the boer".

Feelings of powerlessness have been inflamed by President Cyril Ramaphosa's 2018 claim when speaking to Bloomberg News in New York that "there are no killings of white farmers in South Africa". His office later clarified that he'd meant that there weren't large-scale, organised attacks on white farmers.

Agriculture Minister Thoko Didiza has condemned the recent murder – there have been regular cases of farm attacks recently – but there is a sentiment that agriculturalists are not valued highly enough plus frustration with the South African Police Service’s rural safety management, under-resourced rural police stations and firearm licensing ambiguities.

Primary motive: robbery or racial?
There has long been speculation on the racial nature of these attacks and it has been the subject of a number of studies, which have? concluded that robbery is the primary motive.

Many farmers conduct trade on their farms, selling livestock, chickens or vegetables, handling large amounts of cash, which has been a demonstrable motive in some previous farm murders.

Robbers on farms also demand firearms, because farmers are often heavily armed, as well as cell phones and computer equipment.

Last month Tommie Esterhuyse, AgriSA’s chair of the rural safety commission, reiterated in a radio interview that they did not consider farm attacks to be racially targeted killings. He referred to Free State statistics showing 40 to 45% of farm attacks included farm workers (mostly black) as well as black commercial farmers and emerging farmers.

58 murders a day in South Africa
The lack of leadership of many years, with the ANC embroiled in internal power struggles while the faction of former president Jacob Zuma was looting state coffers, has left many communities feeling ignored by authorities.

A national talk radio show this morning was overwhelmed with phone calls on yesterday's event, illustrating racial polarisation in a country where all live in fear of crime: white callers emphasising the frustration at the continuing farm attacks, black callers pointing out that more people are killed in black townships than on farms.

While this incident is getting a lot of media attention - contrary to overseas reports claiming it is being ignored - there have been other murders all over the country. In the neighbourhood of Philippi, Cape Town, thirteen people were shot dead over 48 hours this weekend.

It has been estimated that an average of 58 people are every day killed in South Africa, of whom an unusually large number are women and children.